A fishing town with dirt roads is one of Uruguay's most popular beaches. Is it the brightly-painted cabins, sweeping unspoilt beaches or the hippie-chic?
By Karen A Higgs 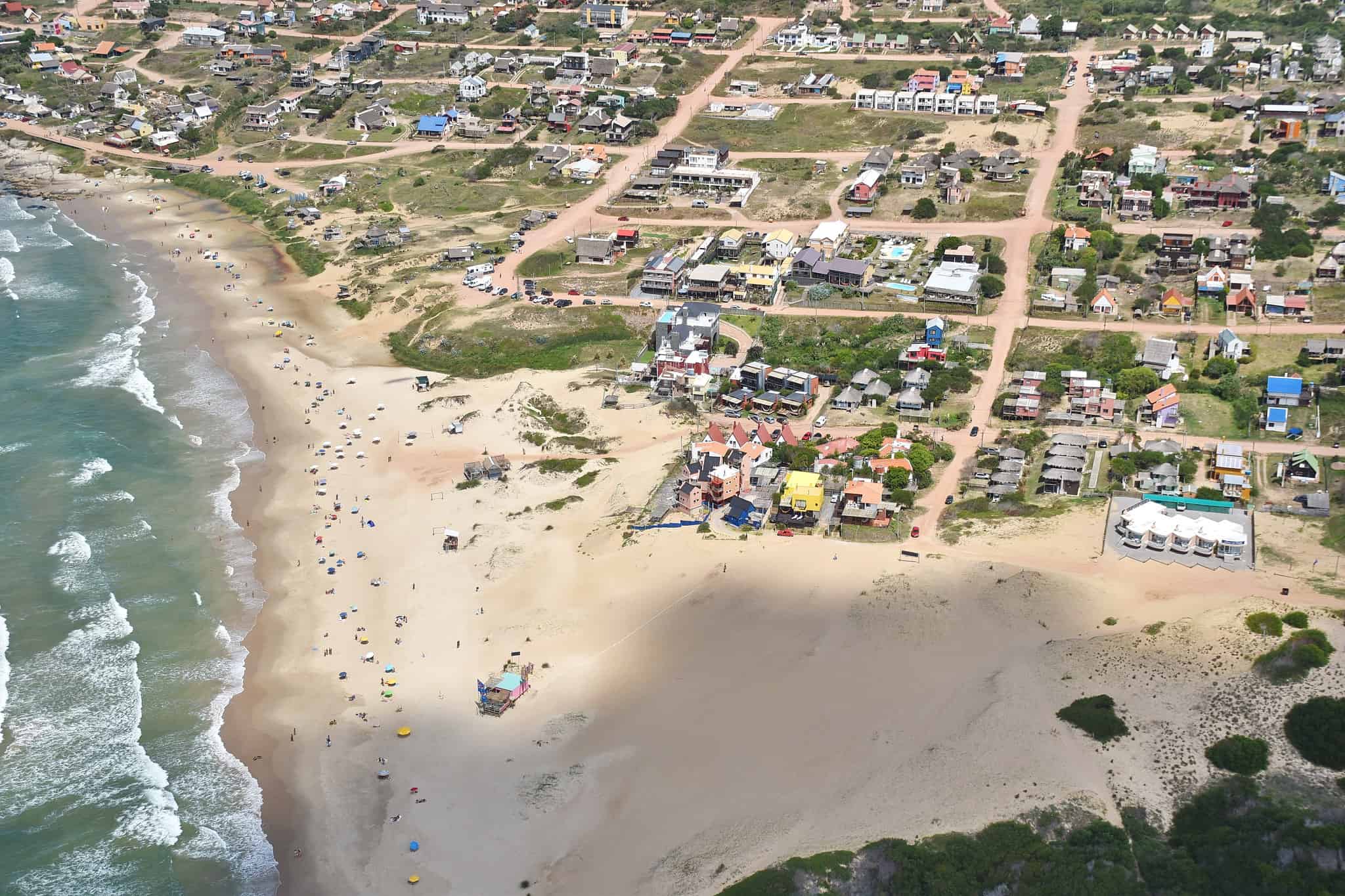 Punta del Diablo has become Uruguay’s most popular beach destination after Punta del Este, though the vibe is completely different.

Just forty kilometres from the Brazilian border, it’s a fishing town with dirt roads, brightly-painted cabins and sweeping unspoiled beaches. You can cross the town in about an hour on foot.

The stable population of around a thousand are mainly fishermen and crafts people and PDD previously attracted backpackers and hippie-types, nowadays there’s a wide range of accommodation from luxury to budget.

However the town has grown in size in the last decade after the Lonely Planet dubbed Punta del Diablo as one of the top 10 places to visit in 2008. Building regulations prohibit high-rises but unthinking developers have packed as many cabañas onto one plot as they can.

The local government has not invested in infrastructure and when the town swells to over 30,000 in January the pressure on services is evident.

As are the stiletto-wearing tourists from Brazil and Argentina picking their way through the pot-holed streets on their way to the glossy, neon bars, of which all except one will disappear come March.

So if you really want to see Punta del Diablo at its most authentic plan to visit off-season, between March and mid-December.  You won’t be disappointed.

A little of the history of Punta del Diablo

Punta del Diablo was founded by the Rocha family who came to the area in 1935 in search of good sea air, as one of their children suffered from asthma attacks.

Around 1942, fishermen from nearby Valizas came to fish “tiburón” (shark). The export of shark’s liver oil was a lucrative trade at the time.

The only way to reach inland was by horse and cart which was pretty arduous as any tracks made in the dunes were quickly removed by the wind. The first road to the town was built in 1968.

The wives and partners of the fishermen made crafts from shells, starfish, pebbles and drift wood and over time and with the arrival of tourists, established a crafts fair which still appears in summer.

Punta del Diablo has wonderful beaches stretching over 10 kilometres of coastline which are utterly deserted most of the year.

The Playa de los Pescadores (fishermen’s beach) and Playa del Rivero are the closest to the centre of town. Fishermen offer their catches from a series of little stands at the end of the main street.

The Playa de la Viuda is named after the widow of an Argentine businessman who lived in the ‘mansion’ at the far end of the beach (you can just spot the mansion waaayyy at the end of the beach). The mansion was built before the road into the town existed and even before Punta del Diablo was found on any map.

Many of the ritziest condos (in the distance) overlook the Viuda. The Viuda and Del Rivero are the beaches frequented by surfers.

Past the rocky headland of Rivero is Playa Grande (Big Beach) which separates Punta del Diablo from the Santa Teresa national park. There is a whale-watching point at the end of Playa Grande.

The east coast of Uruguay has a number of great whale-watching locations – and one is Punta del Diablo. In Uruguay, there is no need to pay for an expensive whale-watching trip. You can see the whales clearly from the beach.

How come is possible to see whales from the beach? The water is very deep close to the coast, making it an ideal play spot for the whales as they migrate between Argentina and Brazil. A friend of mine observed that the Uruguayan coast is a kind of “spa” for these beasties.

In Punta del Diablo there is a wooden watching post at the end of Playa Grande. Some of the first whales of the 2015 season were spotted there in June – which was exceptionally early for the regular whale-watching season.

Walking along Playa Grande we saw two or three whales just metres from the beach and they stuck around for a long time. We watched them for an hour before eventually moving on ourselves – leaving the whales behind!

When to visit Punta del Diablo

The crazy time of the year in Punta del Diablo is from Christmas Eve to the end of January.

Christmas and New Year revellers are mainly Brazilians and Argentinians, who come with family and friends to celebrate the holidays.

Then in January a deluge of twenty-something partiers hits the town with full force. The usual population of apx 1,000 people swelled to 35,000 in January 2015.

February and the Easter/Tourism week holiday sees the return of Uruguayans and other families.

Off-season, between March and mid-December, Punta del Diablo goes back to being a sleepy seaside town with deserted streets and beaches, mainly frequented by Europeans (particularly Dutch – I assume because a number have settled in the area in recent years and they have spread the word to their compatriots about what a great holiday destination PDD is).

Surfers do well to visit between April and November.

Getting to Punta del Diablo

Driving from Montevideo (300 km away) – the driving is along almost deserted roads (especially after you pass Punta del Este) most months of the year and takes 4 hours.

Driving from Montevideo International Airport – The drive from Montevideo airport takes 3.5 hours. If you have arrived on a long-haul trip, I do not recommend driving straight to PDD as you will be tired. Plan to spend a night in Atlantida (a beach town) or a few days in Montevideo (a great town!), both are just 20 km from the airport.

Bus from Montevideo – buses take around 4.5 hours. The cost is about 500 pesos for a one-way ticket. You can find out times from the Tres Cruces bus website. If you can’t read Spanish, check out my article which explains how to travel Uruguay by bus and read the time-tables.

Need to hire a car with pick-up at your hotel in Montevideo or at the airport? The Guru recommends this great little local car-hire company

There are no static ATMs in PDD – the nearest are in Castillos and Chuy. So have back-up plans.

During the summer months, mobile ATMs are brought in, however they frequently run out of cash.

So, credit cards are accepted in most supermarkets and restaurants out of necessity in Punta del Diablo.

This is not the norm – many restaurants and smaller hotels in other parts of Uruguay do not accept credit cards*, be prepared for this and always carry some cash (US dollars get the best exchange rates).

And remember that as a tourist when you use your international credit card in Uruguay you get your tax back on hotels and meals.

*If you are asking yourself why, it is because of the greedy credit card companies, who charge about 6% commission—a percentage that smaller businesses can ill-afford. 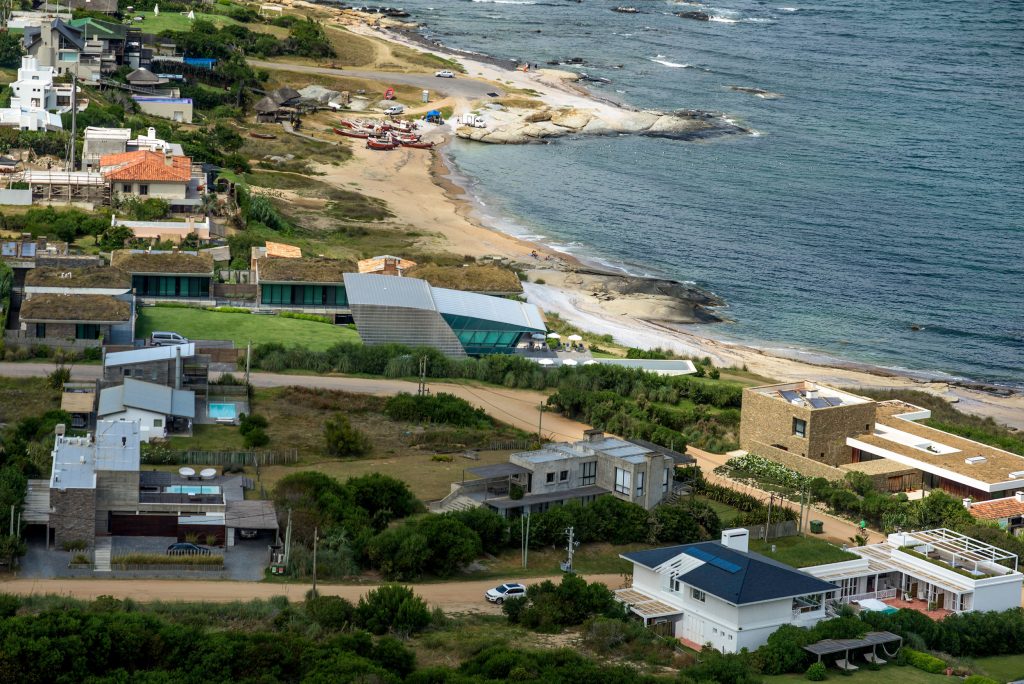 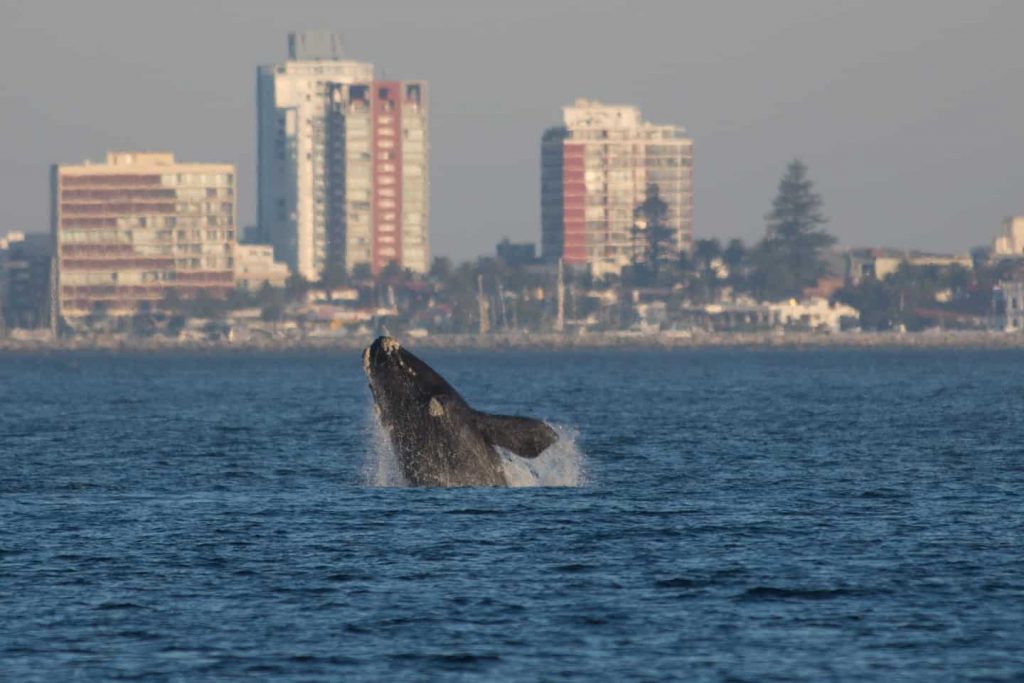 In Uruguay you can watch whales close-up from the beach. Save yourself an expensive trip to Patagonia & feel great that your viewing generates zero stress. 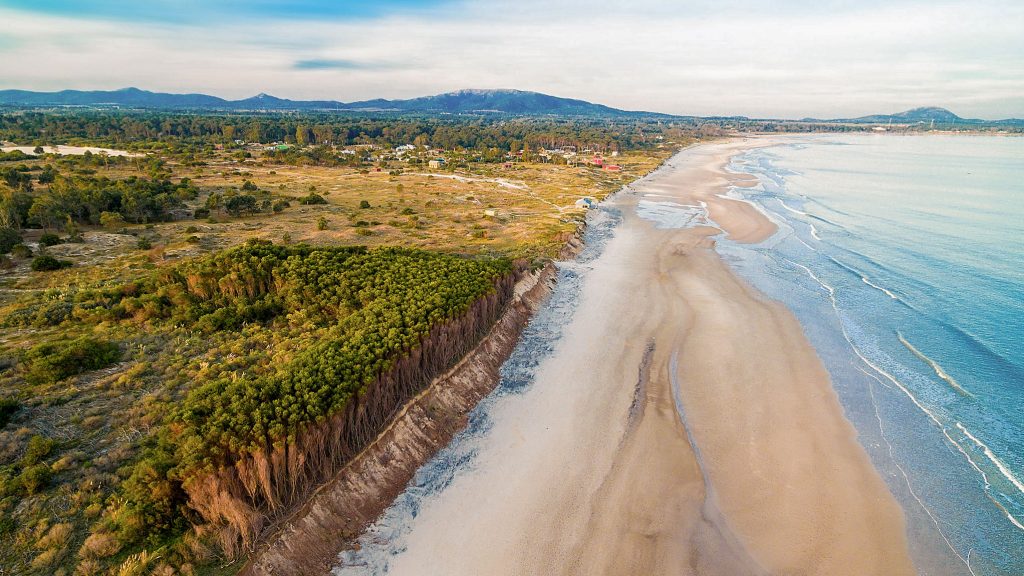 Under an hour from the capital lie some of the Uruguay’s best kept secrets, because most of the tourists are… Uruguayan. 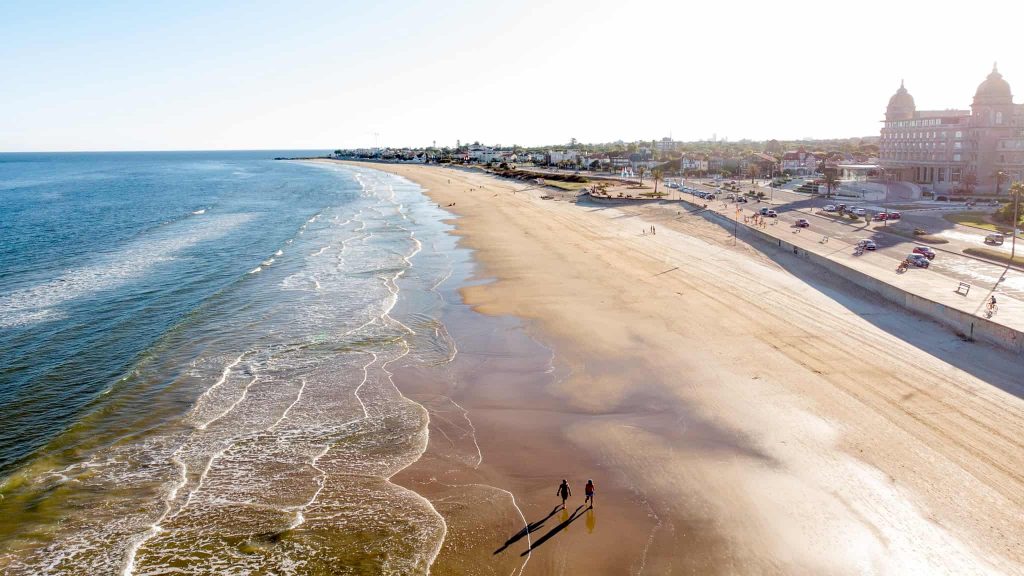 The capital of Uruguay has beaches with fine white sand, great for paddling or swimming, kitesurfing, with fairgrounds, and wheel-chair access. 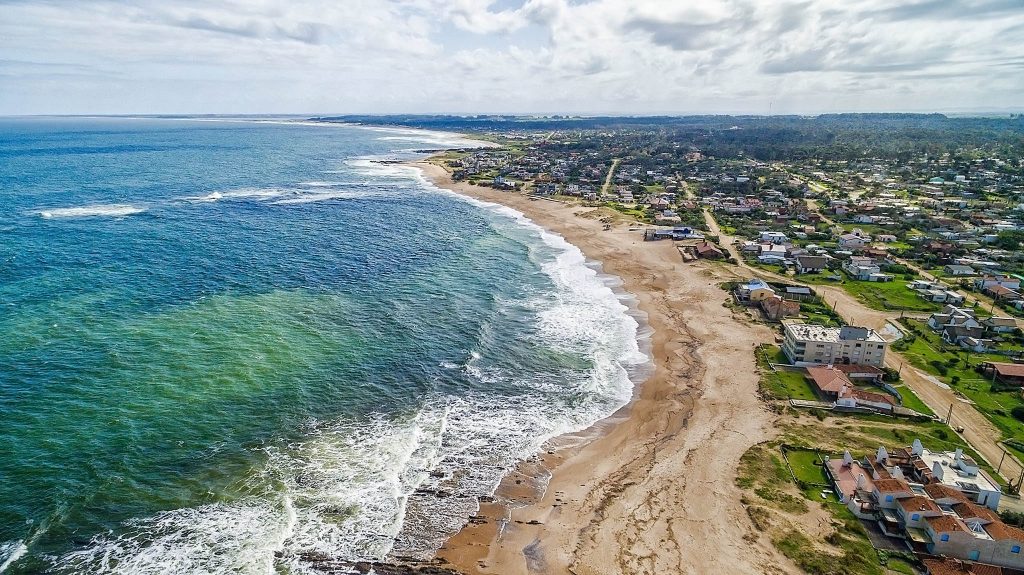 Without a doubt, Rocha has some of the very best beaches in Uruguay. And they’re almost totally deserted for virtually ten months of the year. 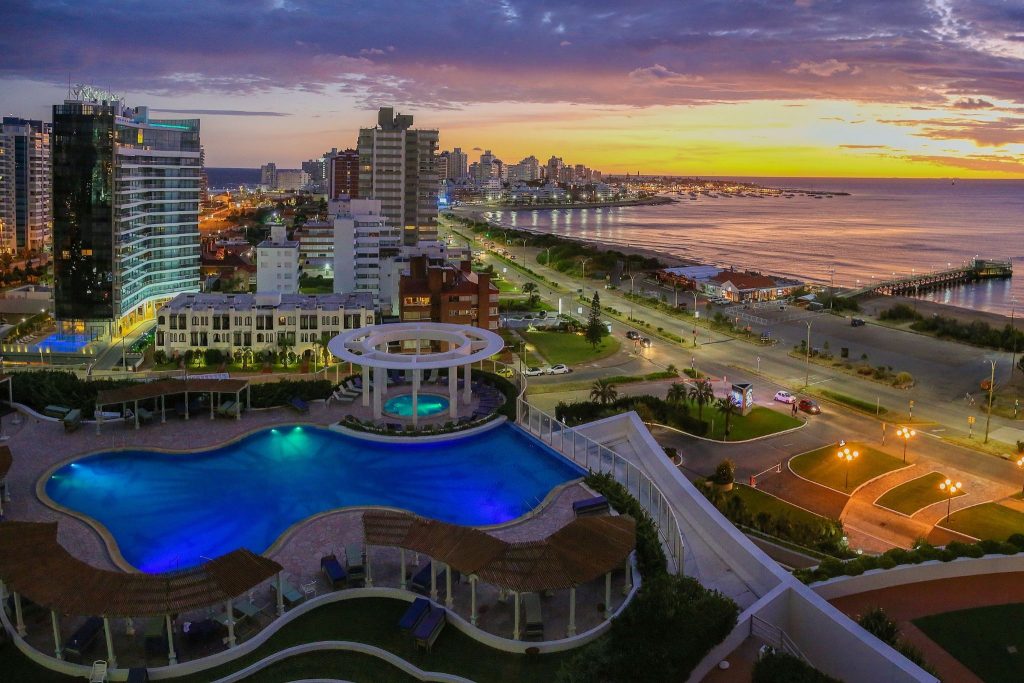 8 things to do in Punta del Este

Argentines and Brazilians LOVE ‘Punta’–it’s Uruguay’s glamour puss beach resort. So you may be surprised at some of our must-do things to do.